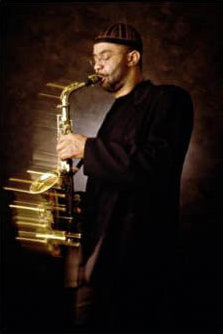 NY Jazz Report's Thad Kawecki and Will Wolf visited Birdland on Wednesday 3.December to catch saxophone virtuoso and Warner Bros. Records recording artist Kenny Garrett as he and his quartet opened their 4 day engagement. His recent CD is entitled "Standard of Language."

Kawecki: This has got to be one of the most energetic performances I have ever experienced. Garrett came on like a tsunami from the first note and sustained this level of intensity unabated for more than half the set. Uncompromising, and at times demanding, this music requires stamina in musician and listener alike. I was a little worn out after the first two tunes.

Wolf: I found the intensity invigorating. Garrett and his attending troops helped to keep me vitalized, and in fact, they even awakened some dormant spirit within me that was waiting to be released. I felt like I was part of the adventure, enjoying the ride even though I didn't always know where I was going. It also set up a well-suited segue into the third piece--- a tranquill anthem elegantly rendered by Garrett's tender and graceful soprano, and accompanied by only the piano. The contrast in pace and mood was stunning.

Kawecki: I didn't mean to imply that the uptempo numbers were tedious to listen to, so let me explain. Garrett's improvs proceed at a blistering pace, at high intensity, and draw on a wealth of styles and ideas. But they are also very, very long, and processing all this information does burn a few calories. This music also operates on a visceral level, inducing a swoon or trance state similar to that created by the Coltrane Quartet. Maybe I should have been a little more open on this level since it's less taxing.

Wolf: Speaking of Coltrane, what did you think of the way Garrett traveled non-stop, flying acrobatically from the first number directly into "COUNTDOWN," effectively sustaining that extraordinary energy? And then, a splendid treasure of improvisation---demonstrating creative and technical control of the instrument, and producing a dazzling array of expressive sounds while utilizing the full range of the alto. It was spellbinding.

Kawecki: Garrett's unaccompanied alto was a high point of the evening. While providing necessary contrast to the full band texture of the proceeding tune, it was the perfect opportunity to give undivided attention to his improvisational process. And it struck me as a spiritual but musically underivative homage to a past master.

Wolf: And what about that drummer---Ronald Bruner---a relentless dynamo, armed with a ready arsenal of explosive ideas, fiercely but intelligently attacking his drum kit and adding clever bursts of sound at all the right moments? BOOM!

And, of course, always maintaining a hard-driving, steady beat.

Kawecki: This guy has enough energy to power a small city. I sensed a real bond between Bruner and Garrett. He played with skill, humor, and an enthusiasm that was infectious.

Wolf: And I sometimes missed that special interaction, that chemistry between Bruner and Garrett, during the third tune. Even though it worked very well as a duet, I found myself wondering about what inventive accents Bruner would have added to this courtly, melodic poem.

Kawecki: An interesting piece, and as you noted earlier, a real eye in the storm. Garrett's world-music influences were noticeably showcased in its second movement, where his solo soprano interlude seemed to speak Arabic. It was heady and exotic, a tale from the minaret.

Wolf: A brief Arabian delight. And the set itself was a grand world tour, an eclectic journey through---bop, world, asian, modern, free. A refreshing and exciting adventure.

Kawecki: One could almost say a journey of epic proportion. Garrett is an artist with a lot to say and needs a lot of space in which to say it. And while this performace was undeniably brilliant, sometimes less can be more.